Haven’t posted in some time now on me blog figured I should write about what I’ve been into for last few months. As the title suggests that is it been is adding more & more to my vinyl collection. I absolutely love my vinyl more so than my Laserdisc collection.

As I sit here writing this up I have Electric Wizard’s Dopethrone on the Turntable. What I think about Dopethrone as a record I may talk about later on maybe…
I’ve probably added a good 50+ to my collection in the last few months so I’m going to talk about the ones that impressed me the most.

Recently I hit a local Record store (Patrick’s Books & Music great guy if your local or not and in Pasco County give him a visit) in Hudson Florida and got a hold of a few interesting records a few that I really wanted in my collection Billy Joel Piano Man & Pink Floyd Dark Side of The Moon. Also got a great deal there on Morbid Angel’s latest album Kingdoms Distained and Cyndi Lauper’s She’s So Unusual.

The Billy Joel album is the one I want to talk about. It is a 1st pressing (1973 year I was born 45 years old.) so I was expecting it to sound crackled and not so good considering the cover was rough not ruined but was apart at the seam. Which I fixed with a hot glue gun and it looks very acceptable now.
I cleaned it up with my vinyl cleaning chemicals and brushes and towels to drop on the Turntable and hear that it sounds fantastic! It has minimal popping which a few more cleans should eliminate completely or clean enough to make them not audible.
Piano Man is a classic every Vinyl collection should have it.

For Fathers Day my daughters all gave me money for Planet Retro’s Dollar Holla day in St. Petersburg Florida.
I’m very lucky my girls always take care of us meaning their mother and I. We have been blessed that way.
At Planet Retro I found my favorite death metal bands LP picture disc signed by the 2 founding members John Tardy (Vocals) & Donald Tardy (Drums).
Obituary The Xecutioners Return.
The second I saw it hanging and then my friend pointed out it was signed I knew then it was going in my collection even if it wasn’t in the dollar record boxes:-) 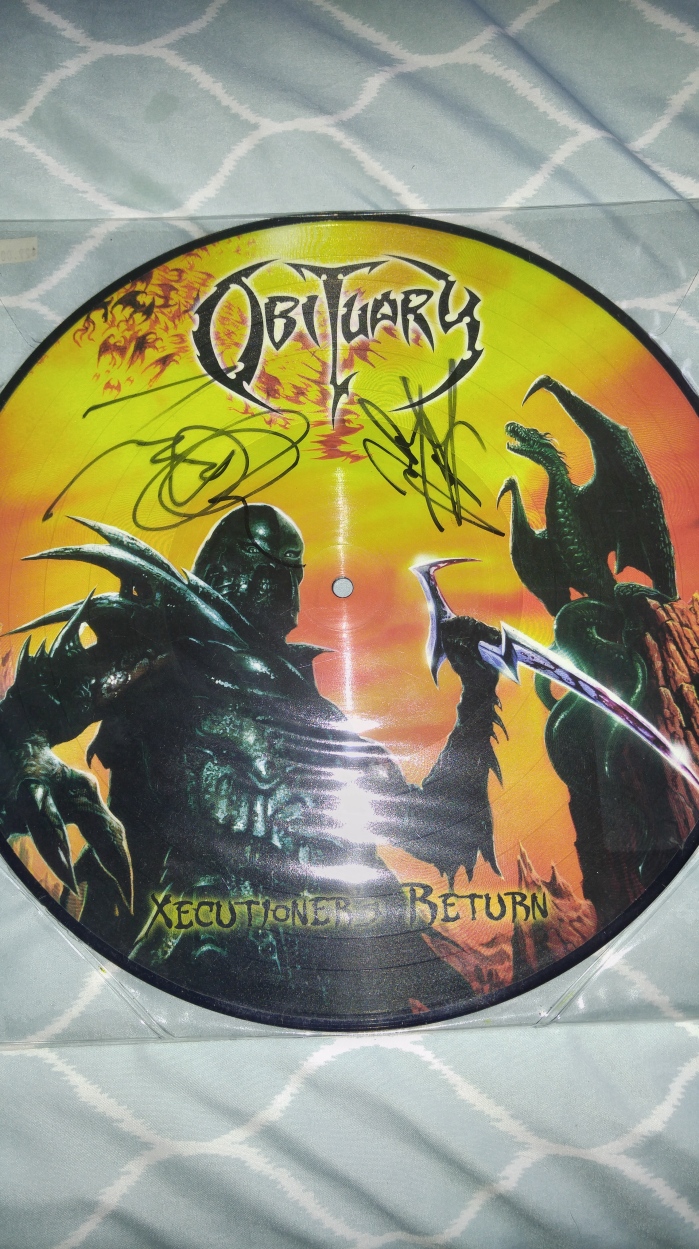 Xecutioners Return is actually an older album released in 2007. Of course I did get their latest self titled album Obituary and it is a great album it is one of my favorites right now was released last year 2017.
If you are adding death metal to your Vinyl collection Obituary better be in it especially their 1st album Slowly We Rot 1989 absolutely insane still on my top 10 best list and at the top of it. Will be expensive to get on Vinyl I got a hold of a picture disc. Right now cheapest I’ve found the standard black vinyl edition for is $60 some as high as $200.

Almost forgot had to come back to here to add the classic Slayer’s South Of Heaven 2013 LP Remaster/Re-Print.
This is seriously a fanFUCKINGtastic release it sounds phenomenal.
I am hearing things on this record I never heard on the tape or CD it’s really that damn good.
Every song is crisp the bass is solid and the tweets are going all in a tune that makes you want to mosh right there as your listening.
Amazon was selling this release the 2013 LP for a good price I suggest ordering it while they still have this version in stock I have no idea if the 2017 or 2018 LP sounds this good I know the pressing before 2013 was not as good.
The 2013 cover doesn’t have the Slayer logo on top left corner. 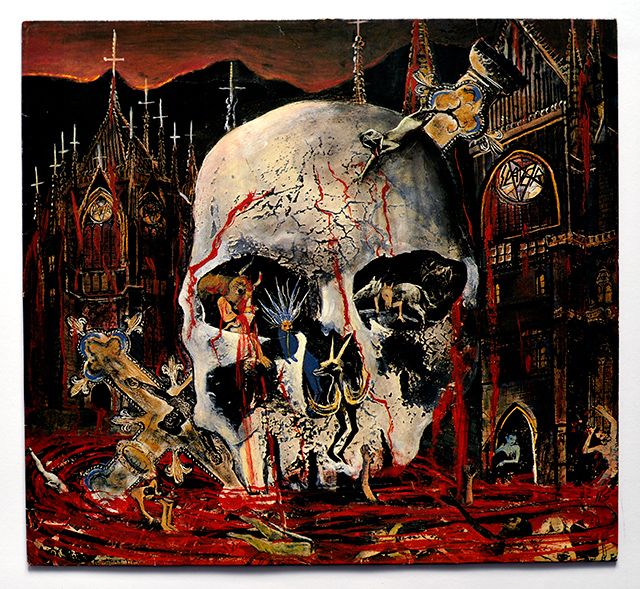 On to newer bands that I recently discovered and am into these bands right now are either playing on my Turntable or in my cars CD player either way I love them!
1st band Archspire released their 1st album on CD only which I DO NOT have All Shall Align (2011)
These guys are from Canada and they are the best of the best when it comes to Technical Death Metal aka: Tech-Death.
My recent purchases on LP are their 2nd LP The Lucid Collective and their latest LP Relentless Mutation. 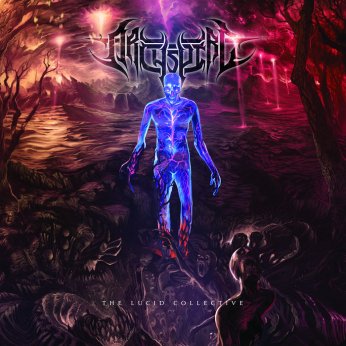 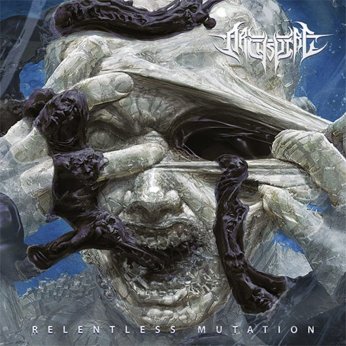 These guys are insanely hard & fast and no they aren’t using any electronic synths for the ultra fast speeds you hear. Tech-Death does not mean Techno it means technical.
They use advanced methods of playing.
I’m absolutely hooked these guys are the now and future of heavy metal. If you have never heard them and are into metal of any kind you owe it to yourself to experience this great band.
And if you can get on LP do it because they are limited releases. I was so impressed with this band not only did I buy the LP’s I also bought the CD’s as well.

Now onto something that has always fascinated me Space & Aliens.
Yes, I think they are out there and so do the guys who are in the band Rings Of Saturn.
This band sings about Aliens and space! How cool is that? They are considered Deathcore but me and many others have labeled them Aliencore music their latest album Ultu Ulla which is what I got on LP is awesome they are hard and fast and have a unique sound to them very different than you can probably imagine considering the type of music they do and it’s all about Aliens man!.. maybe not all. 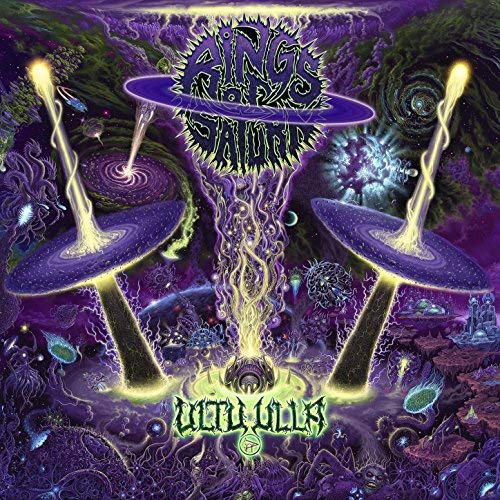 Their sound is incredible and the singer has a crazy voice I think it’s great. Even if your not into the Alien thing this is still some damn good metal and should be given a listen for sure. Ultu Ulla actually means “Time Immemorial’ in Sumerian Cuneiform”

Now onto the Doom and Gloom sound. These guys formed together from USA and Europe to start a band called Anopheli meaning Mosquito or good for nothing.
They are heavy and deep there is only 1 vocalist listed in the band but the vocals are shared between  a man and a woman.
And the cello is used in great form with this heavily made album. It’s about a man who died and is talking with Death as he is being led to the light or his judgement /final destination and Death thinks he knows men and their deeds but is learning he does not really know men at all.

The second I heard this it was a must for my Vinyl collection and if you can find it get it they are limited. The latest album is The Ache Of Want. I am desperately  trying to find and get their 1st LP A Hunger Rarely Sated I’m in touch with someone in Germany so I’ll see what happens.
It’s very deep beautiful but heavy as hell something that is hard to accomplish with this type of music but they achieved it and did it well.
This is another must listen. 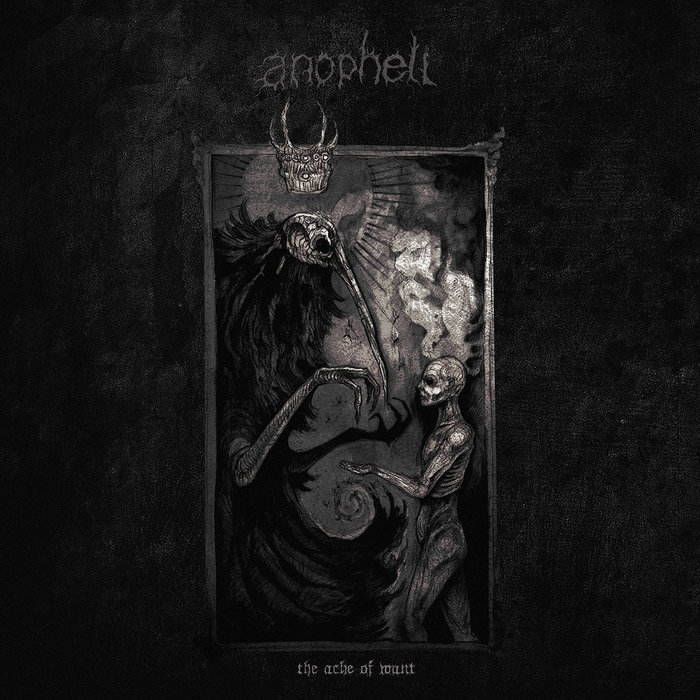