I’ve never really spoke of this but to few people. My wife being the main person I tell when I experience Sleep Paralysis.

I began having these episodes in my early 30’s. Which studies already show that the SP episodes start at age 25-44 years of age.
Physical paralysis which renders you completely paralyzed and unable to speak but eyes are open and they can actually move and see but that is all the control you get you are awake in a complete paralysis state.
Reason I write this is because last episode I had was in 2008. 2 nights ago I had another episode which I had hoped would never occur again. Between 2003-2008 I had over 20 occurrences. Between 2008- current date 1 and this occurred on January 20, 2015.

2008 occurrence was the only time I saw shadows that seemed to interact with my body. My legs propped up and 2 tubes in me. I’ve learned at this point to never panic. When calm my whole body hums. When panic starts you will begin to suffocate. Crushing of throat or chest occur. I believe this is what has caused many sleeping deaths (SUNDS) Sudden unexpected death syndrome.
I’ve read accounts that people say demons “Succubus”, Alien interactions, and lastly Shadow People. None of these seem to be logical to me. The shadows I saw were not to tall my guess 5′ -5.5′ but thin and moved in blurs but could not identify them as any being or persons or make out any facial features. And they apparently didn’t kill me which is what the Shadow People are said to do. Therefore I think hallucinations were caused from a waking sleep state I was in. Meaning I awoke during REM. REM causes the body to shutdown for restoring energy.
Almost every time I had an episode I was sleeping in surpine position back down face up. The only time I had been in sleep paralysis on my side was during the day no one was home at that time. Didn’t see things like shadows moving eyes opened like normal but could hear my door being knocked on but could not move or yell. The longest occurrence was the 2008 experience it at least by what I perceived as time was about 5-7 minutes long.  Could have been shorter or maybe longer seems to be The longest lasting episode I ever had.

The others were maybe 1-2 minutes at minimum and 3-4 minutes seems average for me in time frame from 2003 -2008.  This last one again figures that blurred when in motion but nothing else lasting my guess 2 minutes. Always seems to be 4 or more figures that move in blurs at least in my experiences. Natural reaction in mind is panic you feel violated and threatened the feelings can be overwhelming and will crush your breathing I always calm in few moments and the crushing of chest and throat stop and normal breathing occurs. Even if someone was there no need to panic there is nothing you can do about it. You can’t yell or move so just accept if something bad is going to happen you have no control of it.

Many, many times I move my eyes to my wife and try to reach for her or call out to her but can not. Sometimes I won’t look down to end of bed  I still do not enjoy seeing figures move around me even though I know they really aren’t there it helps keep me calm. When I wake up later that night or morning I know it was all from being in a wakened dream state. These feelings and hallucinations seems to be a natural part of it. Others that experience this have same type hallucinations of course others see things more clearly or have an out of body experience the one thing all people that have experienced sleep paralysis have feelings of violation and bodily threat.  I believe the reason we all feel violated and threatened is a natural response of being completely vulnerable. Being awake in a non-responsive state is especially frightening for everyone even after many occurrences although the first time it occurs is the most frightening.

As far as demons , Shadow people or Aliens go I seriously doubt that. There are many that claim the last 3 over what science can prove as far as sleep paralysis. Scientists have done many observations and recordings of people in sleep paralysis state and no people or beings were ever seen by the observing scientists or doctors.

Do I believe in God? Not sure. Do I think there is Alien life out in the universe? Yes! I think it’s more plausible than a magical unseen god. Do I think either of these beliefs are what I see in paralysis? Nope! I didn’t see demons or little Grey aliens at end of my bed just shadows that seemed to move in blurs. Caused from an active REM state while in a awakened state.
Don’t want anyone to read this and think it’s demon or alien or shadow people related because this is not the case.

I’m fine if people want to believe this is a supernatural occurrence I just don’t believe that’s the answer.

After having the Raspberry-Pi for last 7-8 months. It’s use was a build for something unrelated to a media center box.
Did try XBMC Gotham on it and just wasn’t working. Even Kodi 14.0 has it’s issues I have a 75Mbps Down and 30Mbps Up FiOS connected to a switch that is 1gb throughput the router/modem also supports 1gb.

Streams live TV just fine as long as it’s standard 480i/p. It can record HD just fine and even play them back but streaming HD right now just isn’t working.

I took a few screens and also a video it’s low quality don’t have Roxio Capture setup. Which is how I should have done it.
Using Kodibuntu-Kodi. Using Server WMC as my PVR server gets Cable using the HDHomerun Prime multi tuner Cable card hardware. I personally prefer Server WMC because TV Guide is working no extra steps or XML or make a monthly payment to schedules direct to get you guide.
I have used Schedules Direct when I was using NPVR instead of Server WMC. Schedules Direct is awesome but it just doesn’t have the logo’s so you have to go through and add them.

My base HTPC “Living room” is where it grabs Live TV, music, Movies, TV shows, Picture and so on. 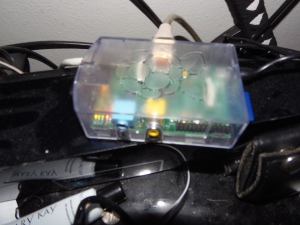 This is the Remote I use in my room for Rasp-Kodi box. Also have one for living room HTPC but it rarely gets used out there since I use a Media Center Remote control. But is important to have a keyboard & mouse available it comes in handy more often than not. This remote while small does have a touch pad that is used for mouse and all the same keys a full size keyboard has minus the number pad on the right of kb.