I had a Philips 5000 series LCD HDTV it was beautiful. Still is beautiful the picture quality on it is top notch.
Ended up selling it to one of my friends.

Was interested in the Vizio M-Series televisions this was Vizio’s step up into the mid-range television battle. Something Samsung and many other brands have had for many years now.
After researching the M-Series model I liked. Decided to go for it and get the 55″ M-Series Vizio LCD/LED Passive 3d/Smart Television.

Pros: Smart TV , Passive 3d. The 3d on the Vizio is fantastic it’s seriously the best out of the 3 different Tv’s I purchased. When in 3d the picture stays nice and bright and has very little cross talk. Attractive frame very thin it’s all screen barely any frame to be seen. Has option in menu to turn off the Power Button light in front of the TV. Passive 3d glasses are cheap and the glasses that they use at movie theaters work just fine with passive 3d Televisions.

Cons: Very little apps to choose from. Standard 2d television picture quality isn’t that great. Has heavy bleed through on 4 corners. Bleed through is to be expected on the Thin/Slim LCD/LED based TV’s because the LED lights are on each side of the Television. But this much bleed through is unacceptable.
It’s not bright at all with every setting at max it’s still dull.
The Vizio went back to Walmart for a refund.
To be fair Vizio’s technical support said the TV was defective and to return to place of purchase since I only had the TV for a month and 1 week.

This time I went to BestBuy for my purchase I had already chose the Samsung model when I started shopping for a new TV it was either the Vizio, Samsung or the LG Google TV.
Went to Best buy and picked up the Samsung not a smart TV but has 3d uses Active 3d technology.
Samsung

Pros: 2d Picture quality was great had no bleed through at all very vibrant. Nice and bright had no problem setting backlight to half up and was still a bit to bright. Colors were rich.

Cons: Only 2 HDMI ports and 1-USB port and 1 component input that was shared with the Composite input. and 1-Optical (AKA:Toslink) input & 1 -Optical output (AKA:Toslink)
The remote control was cheap feeling and not very pleasant to look at or use.
Doesn’t support HDMI ARC this is terrible all TV’s should support this. I have a Home theater Receiver that all my components go through. When watching a HD channel and it’s Dolby 5.1 the receiver will automatically decode the 5.1 audio. Well not this TV it would only do 2.0 PCM audio in order to listen to a movie in 5.1 surround I had to manually change setting in receiver every time a show or movie was on that pushed Dolby Digital 5.1 sound. This also was the case for my PlayStation 3 or 4.
The active 3d it plain sucked ass! Barely could tell you were watching a 3d movie.
At $20-$40 a pair of active glasses that 3d shit should be so good it should smack me in the face. So now I know not all 3d sets are created equally.
This TV went back to BestBuy on the 2nd day.

Back to Best Buy to shop for the 3rd time to get a solid 3d HDTV.
This time it was a toss up between the Samsung 6400 or the LG model both were 55″ TV sets.
The Samsung picture quality was superior to the LG not that the LG looked terrible it just looked pixelated while the Samsung looked smooth and clear. Both were running same video feed.
Went with the Samsung again. This time I went with the Mid/High end Samsung.

Pros: 2d Picture quality is amazing. No issues with SOE. SOE= Soap Opera Effect some like it some do not. I like the soap opera effect.
The 3d picture is much more superior than the 6030 model the 6400 actually has good pop. I wouldn’t say the 3d is as good as the Vizio’s passive 3d but very close and a bit crisper picture quality. But when in 3d it’s not as bright as the Vizio’s passive 3d picture.
Is a smart TV as well. And this is where it really shines there are many, many apps to select from most free some cost money.
Has 4- HDMI ports ,1-Component, 3-USB, 1-Optical input. supports camera’s and keyboards and can play Divx, Xvid movies from your networked PC’s or from a USB thumb drive.
Is DNLA compliant so not only can I access my HDHomerun Prime tuners right from the televisions menu but it also has the Verizon App which also allows you to watch cable from the TV so you really don’t need a cable box unless you want On Demand and rewind.
And does have voice recognition.

Cons: The remote control is small and lacks rewind,FF, Play ,Pause. Remote has a pad that is touch sensitive it’s not to bad. The remote is lacking some required and much needed number pad and play control buttons.
While the picture quality is fantastic it doesn’t stay uniform when viewing from side angle. There is plenty of room for side view but too far over and the picture becomes overly bright.

Otherwise this TV is awesome it is by far the nicest Television I’ve ever owned.
I loved my Philips and the first 2 TV’s I picked didn’t come close. But the 6400 does it really had me excited to watch it. The other 2 TV’s didn’t. 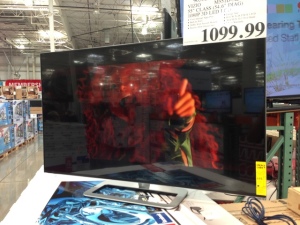 Side note: All the reviews claimed the Vizio TV had good blacks & great picture quality they were said to be very good on this TV. I found the blacks to be good sometimes while mostly they had grey overlay in appearance.
I really do feel I just got a defective one at least that’s what the Vizio tech rep said. But I wasn’t willing to chance getting another one and finding it had the same issue. Was running out of refund/return time.

And BestBuy had a Toshiba 32gb USB thumb drive for $19 I went ahead and got that with the TV as well:-) I only had a 16gb thumb drive. Today a 16gb is nothing special 1 high quality BR rip wouldn’t fit on it.

When I purchased the Samsung TV I didn’t really care about the SmartTV. Also didn’t read the manual like I should have. Have learned a few cool things the TV does have Bluetooth which I like. Also can browse Netflix on my cell or tablet and select a movie start watching it then select Samsung TV on tablet and it will start playing on the TV.
Can connect to your network using Wifi or Cat5. Personally prefer wired over wireless and do use wired on my setup.
The Voice recognition is pretty good and have found that speaking evenly at normal tone is best.
I have a 3 Tuner HDHomerun Prime which is for my HTPC the Tuner requires DNLA for it to work. The TV fully sees and works great using the TV’s interface can now access my tuners from both HTPC and TV interface.
Also recognizes all computers on my network and supports◾DivX 3.11/4.x/5x/6x
◾MPEG4 SP/ASP
◾H.264 BP/MP/HP
◾Motion JPEG
◾Windows Media Video v9
◾MPEG2/MPEG1
◾VP6, VP8
Also has facial recognition when you purchase the Samsung USB camera. Wouold of been nice if they allowed other brands. Cheapest I’ve found was $100 on Amazon.
Motion Control works by using the camera, so the user must be within the camera’s recognition range.
Supports Bluetooth devices keyboards, mouse not sure about other devices but it does pair up with my PC and my Galaxy 3 and Google Nexus 7.

Small update #2 06/21/2014:
I was able to link a tablet Bluetooth Keyboard to the Samsung TV no problem. The brand of the keyboard isn’t a big name or anything. It’s a standard generic Bluetooth keyboard for tablets and small computer/web based devices that have Bluetooth.